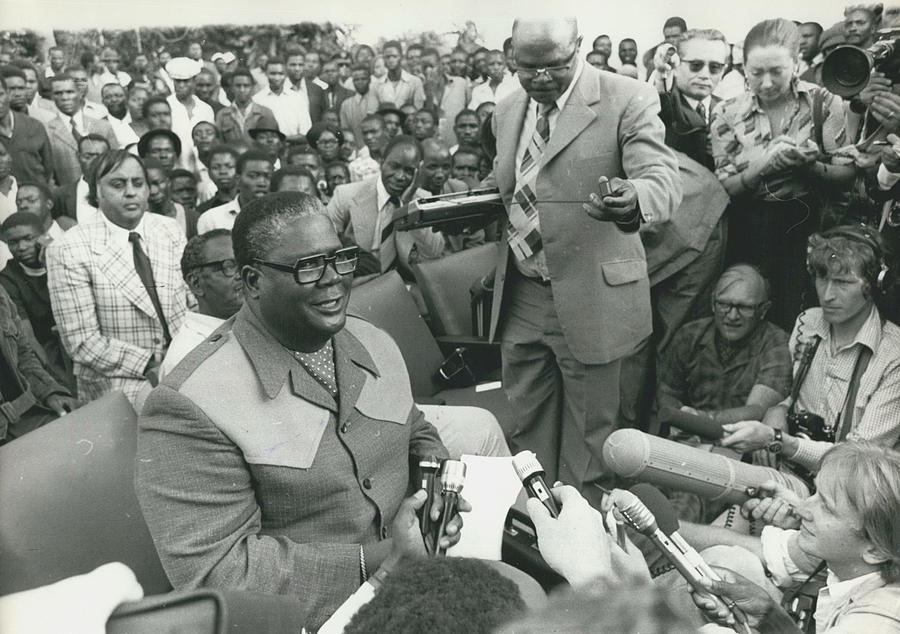 While the Joshua Nkomo Legacy Restoration Project Trust pursues the above initiative as its flagship project, it will continue implementing its programmes and activities that are aimed promoting and preserving the legacy of our icon, Dr. Joshua Mqabuko Nyongolo Nkomo – Father Zimbabwe. The following are the ongoing activities:-

The Joshua Nkomo Memorial Lecture is part of an annual series of lectures (University of Zimbabwe (UZ), University of Witwatersrand (Wits), Joshua Mqabuko Nkomo Polytechnic (Gwanda) and Midlands State University (MSU) in recognition of the sacrifices, strategies and tactics used by Father Zimbabwe and his compatriots to galvanise the kind of consensus that resulted in independence of most African Countries. Dr. Joshua Nkomo is one indisputable luminary and veteran of Zimbabwe’s modern history who invested his entire life to the service of his people and lived to see his political vision and leadership give birth to the modern Zimbabwe. For these reasons the official title of “Father Zimbabwe” has grown around his legacy like a halo of light.

In sum, the purposes of the Lecture Series include, but are not limited to, the following:

• To honour and highlight for the benefit of posterity the rich legacy of leadership, personal sacrifice, patriotism and national reconstruction that have been bequeathed to Zimbabwe by this great champion of Zimbabwe’s Nationalist Movement that culminated in independence in 1980;

• To recall and uphold the constructive spirit of national reconciliation that informed some of the most selfless decisions of this great nationalist and to celebrate the profound capacity of the man to subordinate and sacrifice narrow sectional interests under the imperatives of the broader and more compelling interests of national unity;

• To explore the power and content of the Joshua Nkomo brand and the trans generational impact of his leadership and its relevance to modern day and future Zimbabwe, especially given the challenges of the post-colonial developmental State.

The Joshua Nkomo Youth Leadership Symposium is a convergence of young minds who gather to deliberate and share ideas on issues that affect them as the youth.
The programme offers them a platform to contribute on key national issues and gives them an opportunity to reflect on the values and leadership qualities of the great icon Dr. Joshua Nkomo -Father Zimbabwe. It is by far the biggest gathering of youth leaders across the political and academic divide and it ushers in a new dispensation of Youth Thought Leaders who subscribe to the ideals and values of Joshua Nkomo – NKOMOISM

The Joshua Nkomo Legacy Restoration Project (JNLRP) Trust proudly presents the Father Zimbabwe 20 Years Anniversary – One Million T-Shirts Campaign. The initiative will be officially launched at a Press Conference on the 7th of June 2019 the birth of Joshua Nkomo as a build-up towards the 2019 July 1st commemorations which mark the 20th Anniversary of the death of the icon Joshua Nkomo. The Campaign seeks to bring change to society and inspire change. It further ensures that we do not only have one million shirts worn across the country, but we have one million people and more sharing the values of PEACE, UNITY, LOVE AND TOLERANCE that are the core ideals of Joshua Nkomo – NKOMOISM.

OBJECTIVES OF THE CAMPAIGN:

• This campaign seeks not only to unite Zimbabweans but to unite all our communities, government institutions, corporates and people from all walks of life;

• One million T-shirts, all locally made, will be worn by people all over the country in celebration of the 20 year Anniversary of the death of Dr. Joshua Nkomo, Father Zimbabwe;

• The manufacturing and printing of the t-shirts will create jobs and support families;

• Project will promote economic growth in the country as locals in the clothing and textile industry will be involved in the making of the T-Shirts;

• The Father Zimbabwe 1 Million T- Shirt Campaign brings together local designers and t-shirt manufacturers in partnership with the Joshua Nkomo Legacy Restoration Project Trust who will be selected to create the designs. The T-shirts will depict an image of Joshua Nkomo and 20 (twenty) words associated with his vision, wisdom and legacy.

A target of USD10m (Ten Million United States Dollars) is projected to be raised. Therefore, each t-shirt will be sold for USD10 (Ten Dollars) and will be available at all clothing retail outlets countrywide. Retailers will be signed up as Campaign Partners in order for them to distribute the t-shirts free of charge.

MARKETING OF THE 20 YEARS ANNIVERSARY T-SHIRT AND CAMPAIGN

• Photo sessions at major sporting events where participating teams will pose for photographs while wearing the T-Shirt just before the Match – Partnership to be sought with Ministry of Sport and Recreation;
• All Social media platforms;

Billed as Bulawayo’s most Prestigious Premier Business, Cultural, Heritage and Social networking event, the 2019 INAUGURAL JOSHUA NKOMO AFRICAN HERITAGE FESTIVAL to be held Friday 13th September to Sunday 15th September 2019 offers a Celebration of Legacy, Culture and Heritage. The event will be hosted by the Joshua Nkomo Legacy Restoration Project Trust in partnership with the Zimbabwe Tourism Authority. The Lifestyle Festival, featuring Music, Art, Cultural Exhibitions and Food – is a spontaneous, momentous scene – the meeting of Legacy, Culture and Heritage to stand for decades to come as a stirring symbol of the authenticity of the celebration that is destined to become a cultural force in the City of Kings, koNtuthu Ziyathunqa – kwaBulawayo.
The inaugural event was held in September 2018 as part of efforts to trace the trails of Dr Joshua Mqabuko Nkomo but the event was different in format, and did not take place as a holistic cultural and heritage festival. Therefore, the 2019 festival culminates from discussions and efforts by stakeholders who want to create an event worthy of the city’s legacy and indeed as part of the Joshua Nkomo Legacy Restoration Agenda. Dr Joshua Mqabuko Nkomo was a true African Revolutionary and Icon, he was a strong proponent of an inclusive African Nationalism, as a force for liberation. He embodies all that the African humanity yearns for – humility, freedom, courage, resilience, tolerance, love, care, integrity, life and perseverance. His life and Legacy tells the “African Story” and therefore the Festival seeks to celebrate an African icon whose story also celebrates the pride and cultural diversity of the African Continent.
The Festival is being held at the back drop of Sanganai/Hlanganani – World Tourism Expo – an annual Tourism Trade Fair organized by the Zimbabwe Tourism Authority. It showcases the widest variety of Africa’s best tourism products, and attracts international visitors and media from across the world.

OBJECTIVES
The general objective of the Joshua Nkomo African Heritage Festival is to further enhance the impact of tourism growth in Bulawayo, while leveraging on Sanganai/Hlanganani World Tourism Expo. The specific objectives are to:

o Improve Sanganai’s visibility and buy in of all stakeholders
o Promote cultural integration, heritage and cultural tourism, societal cohesion and peace amongst co-existing cultures
o Preserve marginalised cultures from cultural decay
o Increase length of stay for the domestic and international tourist
o Increase tourism receipts by a significant percent that will impact on Bulawayo’s GDP
o Educate communities and young people on the significance of upholding our culture

5. PUBLISHING OF AN ABRIEDGED CHILDREN’S VERSION OF JOSHUA
NKOMO’ AUTOBIOGRAPHY – THE STORY OF MY LIFE.

The wisdom of Joshua Nkomo- Father Zimbabwe and the NKOMOISM Ideology which puts more emphasis on the values of peace, unity, love and tolerance, needs to be inculcated into the minds of young people at a very early age ‘CATCH THEM YOUNG’. Therefore, the JNLRP Trust has embarked on a project to publish a Children’s Book written along the autobiography: The Story of My Life that will be distributed to all our schools nationwide. Partnership will be sough with the Ministry of Primary and Secondary Education.

6. REPRINTING AND PUBLISHING OF THE BOOK: THE STORY OF MY LIFE

Joshua Nkomo’s Autobiography: The Story of My Life is a best seller and there is a high demand for the book from students at Tertiary Institutions countrywide. The JNLRP Trust has been distributing the books to colleges and universities as per demand. However, due to lack of resources, we could not produce adequate copies to meet the demand. There is an opportunity to reproduce the book and on a massive scale and distribute it to all tertiary institutions in the country through a Partnership with the Ministry of Higher and Tertiary Education.

An assortment of high quality merchandise with the Joshua Nkomo Brand will be designed and distributed to raise funds for various Outreach Programmes. These include:-
• T-Shirts and Caps
• Diaries, Notebooks, Calendars & Pens etc.

Between 2019 and 2023, the Joshua Nkomo Legacy Restoration Trust will embark on the roll- of Programmes and Corporate Social Responsibility (CSR) initiatives that seek to promote and positively project the Image and Brand of Joshua Nkomo within our communities. These will include the following:-

This programme will support brilliant and academically gifted students and young people coming from disadvantaged backgrounds with more emphasis on rural children. It will be targeted at both primary schools and secondary schools assisting students with tuition, study materials and school uniforms.

• Medical Assistance to the visually impaired;
• Provision of Wheel-Chairs and Crutches;
• BUILDINGS OCCUPATION SAFETY PROJECT – this initiative is part of OCCUPATIONAL HEALTH and will involve the Installation of Evacuation Chairs (EvacuChair) in all private and government buildings

and as a result create direct income to support organisations that look after disabled persons. The Ministry of Social Services and NSSA will be approached for endorsement of the programme.

3. JOSHUA NKOMO WITH THE ELDERLY

In December 2018 and onwards, The Joshua Nkomo Legacy Restoration Project Trust will organise a ‘Get Together Feeding Treat’ for the elderly (60s plus) and serve them with hot meals and distribute blankets to each one of them. The media will be invited to be part of the event. There will also be entertainment to give our elderly and experience of a life-time.

This Soccer Tournament will feature local community football teams who will play for a Prize and Floating Trophy. The Programme is targeted at the youth who are engaged in illicit activities like drug abuse, alcohol abuse and sex. It is aimed at using sports to empower the youth with leadership skills so that they become better community leaders.